DJI recently released special editions of almost all of their Consumer Drones, like the Mavic Pro Alpine White or the Goggles Racing Edition, but the one still missing was the Phantom 4.

But of course, DJI wouldn’t forget about it, so they released a DJI Phantom 4 New Year Edition.

The Drone features a cool new colourful design, which is inspired by Phoenix, the Chinese mythology in the “King of Bainiao”. The Designer of the new special edition, Martin Sati, wanted to include all four elements in his design, which resulted in his unique Phoenix pattern.

The DJI Phantom 4 New Year Edition avoids obstacles automatically, uses ActiveTrack to track moving subjects automatically, and its feature TapFly lets you fly with just a tap of the finger. Its Smart Return Home allows the Phantom to avoid obstacles as it returns home. It has a 28 minute maximum flight time, as well as a maximum speed of 44mph (72kmh). Its integrated gimbal results in greater camera stability and smoother footage. With its optimized Vision Positioning System it raises positioning altitude up to 10 meters.

Because of its exciting and cool looking new design, the Phantom 4 New Year Edition</strong> fits perfectly into our range of drones and presents itself as our drone for the smooth start into year 2018. 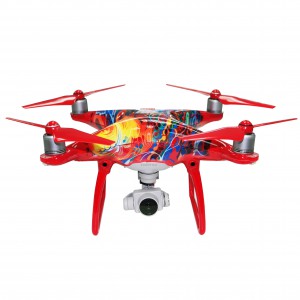